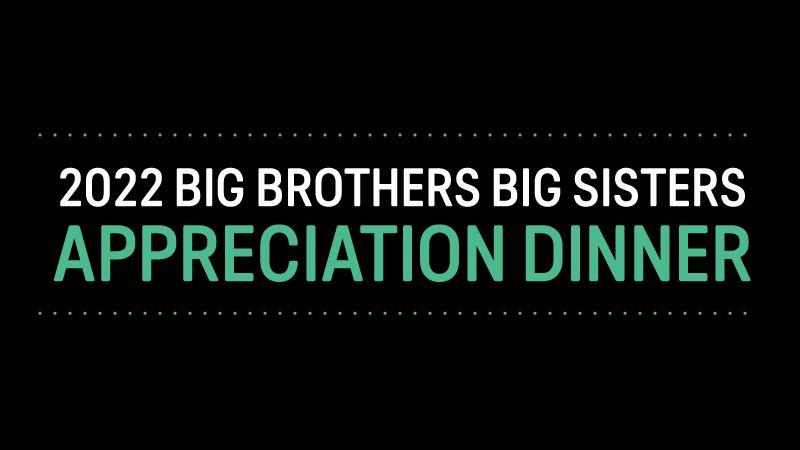 In addition to the more than 60 current volunteer mentors, the following sponsors and donors were recognized:

The highlight of the evening was the presentation of the BIG Impact Award. This award is presented each year to a former Big Brother or Big Sister who has gone above and beyond in their role as a volunteer mentor. This year's BIG Impact Award was presented posthumously to Brian DiFonzo.

In addition to being a former Big Brother, Brian was also an employee at Family Services of NW PA. He started in 2015 as the Supervisor of Big Brothers Big Sisters in Western Crawford County, where he embraced the difficult task of re-engaging old matches and recruiting new volunteers. He also successfully reignited the Bowl For Kids' Sake fundraiser in Meadville.

Brian eventually transitioned to the Permanency Department and worked to create Child Profiles for children in the Adoption Program. He was exceptionally good at engaging and connecting with biological parents to obtain vital information about these children.

Prior to being involved with Family Services of NW PA, Brian was the proud Big Brother to a young man named trevor. Brian met Trevor through a school-based program when Trevor was 10 years old. Although Trevor and his family moved to Idaho when he was 15, he and Brian remained in touch. At 19, Trevor moved back to Pennsylvania, and Brian helped him get a job and find an apartment. Although Trevor couldn't attend the event, he shared the following tribute about Brian:

"Brian is someone who has positively touched the lives of so many without ever expecting anything in return. Kindness and compassion were second nature to him, and everywhere we ever went together we were delightfully greeted with encounter after encounter of those who knew him personally. Growing up, he stepped in to help fill the role of a positive male role model that I so very much needed, even if I didn't know it at the time. Brian taught me core life lessons on a multitude of things, from helping me to develop healthy morals to important functional skills that I would grow to use throughout my life. He showed me what it meant to be a truly genuine person, and was the quintessential example of the kind of person we should all strive to be. Just as he never forgot a name, his is one that will never be forgotten by any whose life he touched. I only wish I had more time to express my gratitude to him for everything he's done, and I will miss him every day."

Brian passed away in April of 2021 after developing Leukemia. He was 54 years old. Brian's former supervisor, Paula Hayes, presented the award and said, "We lost a man who was a positive role model, a dedicated employee, and a loving husband. It was a privilege to supervise him and to call him my friend." Brian's wife, Tina, accepted the award on his behalf.

Thank you to everyone who attended the Big Brothers Big Sisters Volunteer Appreciation Dinner.

Return to all News and Events